Developing software requires to model the world. We, we developers, generally assume that models are regular. It always comes as a surprise when they are not.

All models are wrong, but some are useful.

When it comes to dates, a calendar is a model of organizing time into days, weeks, months, and years. A date references a specific day in a specific calendar.

During the course of history, there has been changes to calendars e.g. from one calendar to another, or even within a calendar. In this post, I’d like to browse some "interesting" changes, that highlight the wrong model quote.

There are many reasons for changes, but they can be arranged under a few categories. While I’m not expert, I could identify the following:

From the Julian to the Gregorian Calendar

The Julian calendar was proposed by Julius Caesar. It included 365 days a year, with a leap occurring every 4 years. In a leap year, an extra day was introduced: thus, the length of the year was 365.25 days. Considering the scientific knowledge at that time, it was being a pretty good approximation. However, there was a slight gap between its duration, and the real duration of the revolution of the Earth around the sun. This caused the official date to slowly drift from the solar year.

Interestingly enough, it was the Church that took the initiative to bring both in sync. Their motivation was to bring Easter back to its "original" date. For the record, the date of Easter is computed as follows:

Easter is traditionally celebrated on the first Sunday after the Paschal full moon, which is the first full moon on or after 21 March (an approximation of the March equinox).

In regard to the subject of this post, the interesting part is that the change from the old Julian calendar to the new Gregorian calendar didn’t happen simultaneously across all territories. Here’s a sample of the jump depending on the country:

That means that a date between two countries might have been different!

The rise of fascism and WWII

Before, and during WWII, Europe was consumed by fascism. Dictators rose to power in some countries, and they formed an alliance. Countries were invaded, such as France, or Poland. A lot has been written about the period. In the context of time, let’s consider two decisions that are still in place at the time of this writing:

Both countries are still using UTC+1:00, with the addition of Daylight Saving Time. Today, though aligned on the same longitude, the United Kingdom and France are one timezone apart.

Following the fist oil shock 1973, the price of oil dramatically increased. To cope with this higer energy price, governments decided to move to Daylight Saving Time: move the clock one hour forward during summer to benefit from one hour more of sunlight, saving electricity.

By living in a country that has DST, one might be unaware that not every country hasn’t. 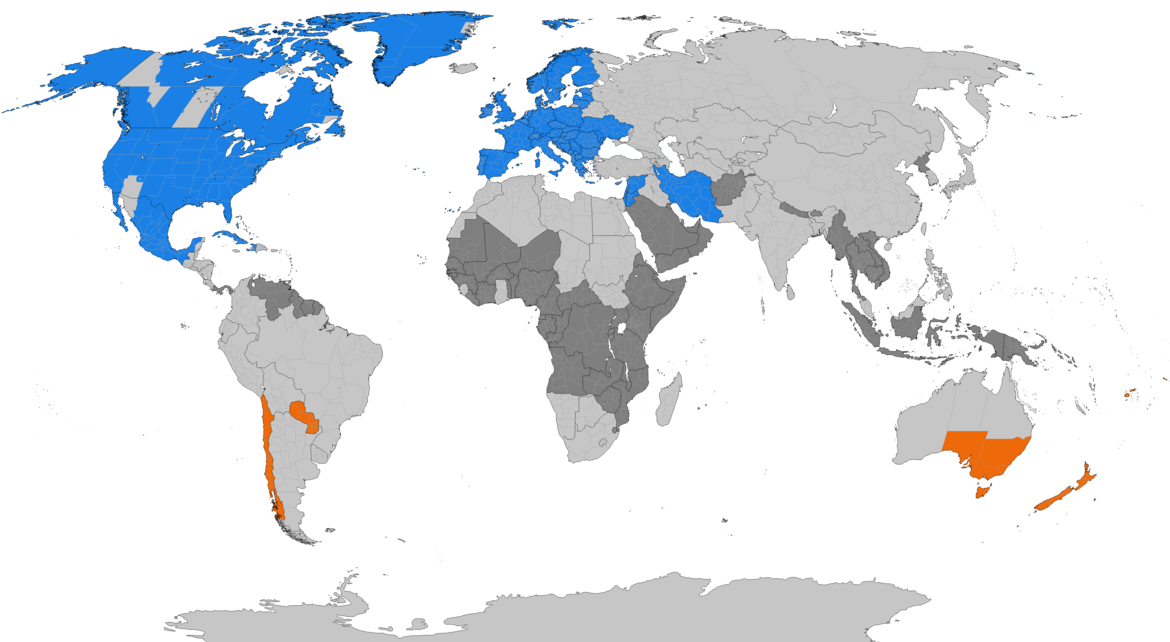 As can be seen, it’s even more complex than DST vs. non-DST. Some countries that used DST in the past don’t use it anymore…​ or stay on DST all year long.

And some countries have an even more complex history. Russia is an interesting example in that regard:

From an European standpoint, it’s also quite surprising to notice that different states inside the USA can have different policies regarding DST.

The last change so far

It might seem that date time changes are a thing of the past. However, nothing could be further from the truth. According to my knowledge, the last change happened in the 21st century..

Until the end of 2011, the independent state of Samoa was located UTC-11:00 (with DST UTC-10:00), east of the International Date Line. However, most of its economical activity was targeted toward Asia, west of the aforementioned line. To more easily trade with Asian countries, the government decided to cross to the other side of the line.

A note about timezones

While not about changes, I’d like to share one fact about timezones that might challenge one’s assumptions. Most people assume timezones are 1 hour apart. If you’ve been working with India, you might know that India Standard Time is UTC+5:30. Beside IST, there are actually a couple of other timezones with a 30 minutes offset.

But it doesn’t stop there! There actually are 3 timezones with a 45 minutes offset:

The JDK uses a static version of the latter. It can be updated using the TZ Updater. Other technology stacks most probably have something similar.

A couple of months ago, I wanted to design a custom logo. The goal was to create 4 different variations for a single logo: horizontal, vertical, 'condensed', and square. All have to display the same bevel-like effect. I’m a developer, and not a web designer For this reason, I chose to use an existing point-and-click web application to create a SVG. It did the job. But I’m curious, and checked the generated XML: I was disappointed. This post aims to describe the lessons learned wit

At work, I’ve recently been asked to advise our engineers on how to write blog posts. A lot of such articles are already available. However, they tend to focus around two main themes: The technical publishing platform e.g. Jekyll, Medium, etc.Metrics e.g. readability score, SEO, etc. Beyond that, everyone is on one’s own. But I believe that writing a good technical article is as much art as engineering. In this post, I’d like to try to address this gap: I’ve been writi

A Java geek
—
Date and time gotchas
Share this