Since some time, I’ve been interested in Kotlin, a language from JetBrains that runs on the JVM. It’s only natural that I wanted to check how Mutation Testing could be applied to the Kotlin language. As Kotlin is too young to have its own dedicated mutation testing tool, I used Pit, a Java dedicated tool. I didn’t expected much, here are my findings.

I started with a Kotlin-port of my demo project. It has two simple classes and an associated test for each. In the first one, assertion is missing and in the second, the boundary condition of the < operator is not tested. This is the perfect use-case for Mutation Testing. It’s a Maven project, so the command is quite straightforward:

Interestingly enough, this works perfectly well, in terms of mutation coverage execution, but also regarding referencing the lines that are the source of the problem. 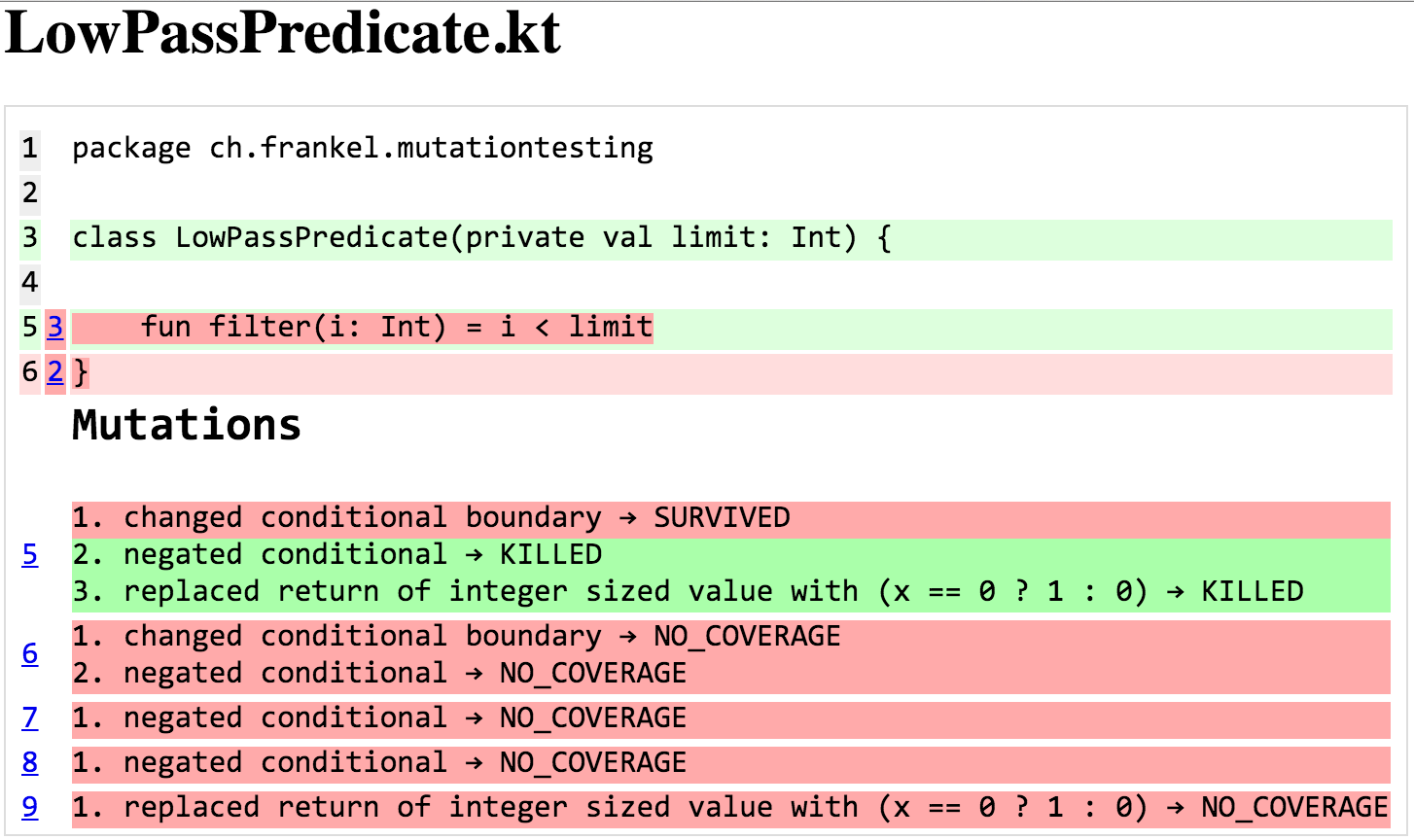 I wanted to go further, to use a real project. The Kotlin folks were kind enough to redirect me to KTor, a Kotlin-based web framework. I tried the same command, but limited on a single module - ktor-features/ktor-server-sessions (I have no clue what it does, that is not relevant anyway). Aye, there’s the rub.

Worse, there are a lot of timeout errors. Since there’s some threading involved, that’s not really a blocker.

For this project, reports are really long, but some errors are really similar to what you’d expect from Java code, for example:

Here’s a sample of the report: 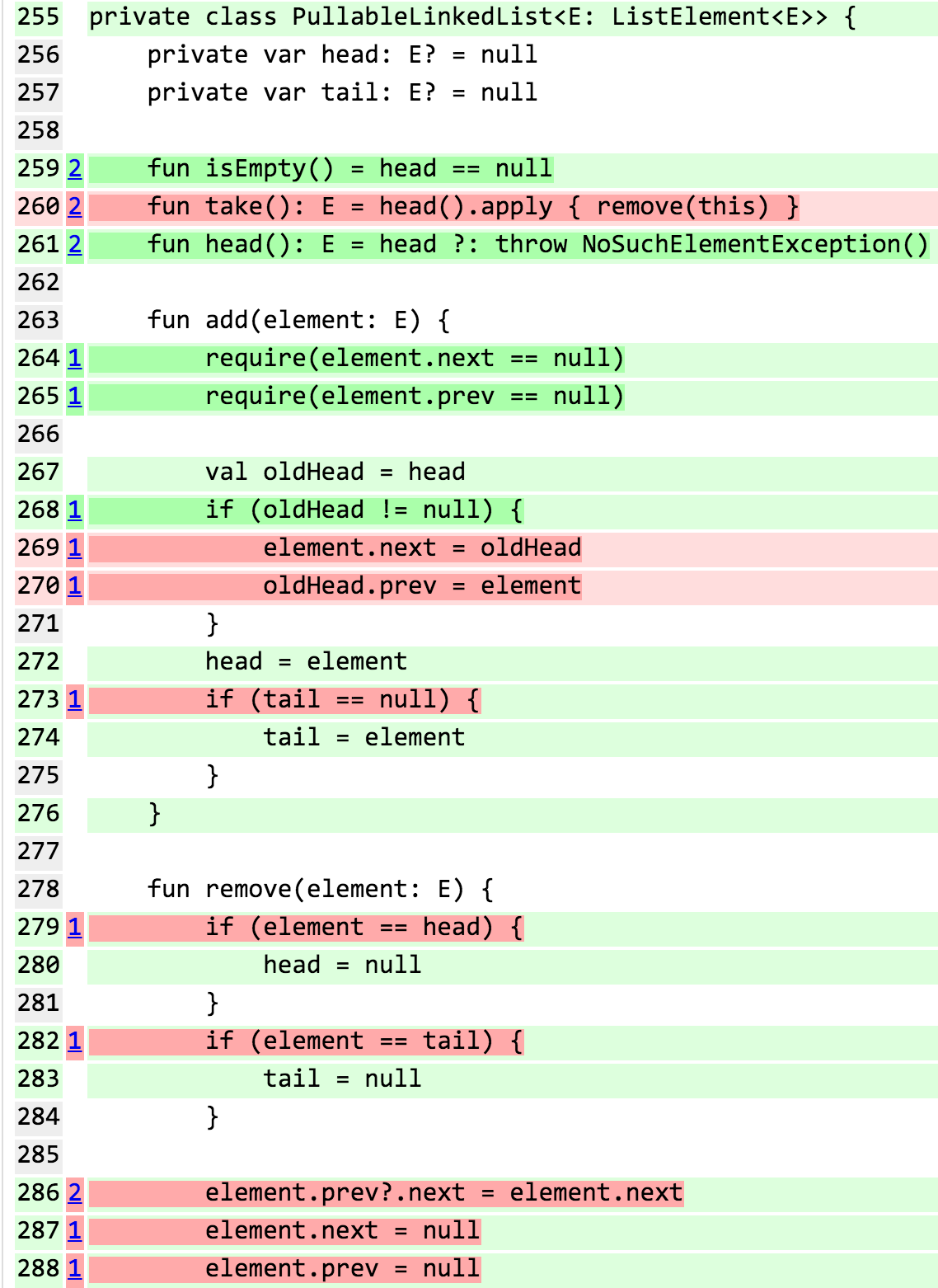 Again, Pit is able to bind the real lines to the problems found. Isn’t life good? If you stop at this point, it probably is. But running Pit on another project - say, ktor-features/ktor-locations fails miserably.

It seems using the when construct in Kotlin generates an inner class that doesn’t contain debug information, which Pit need to works its magic. Let’s exclude the offending class and its inner mappings class: 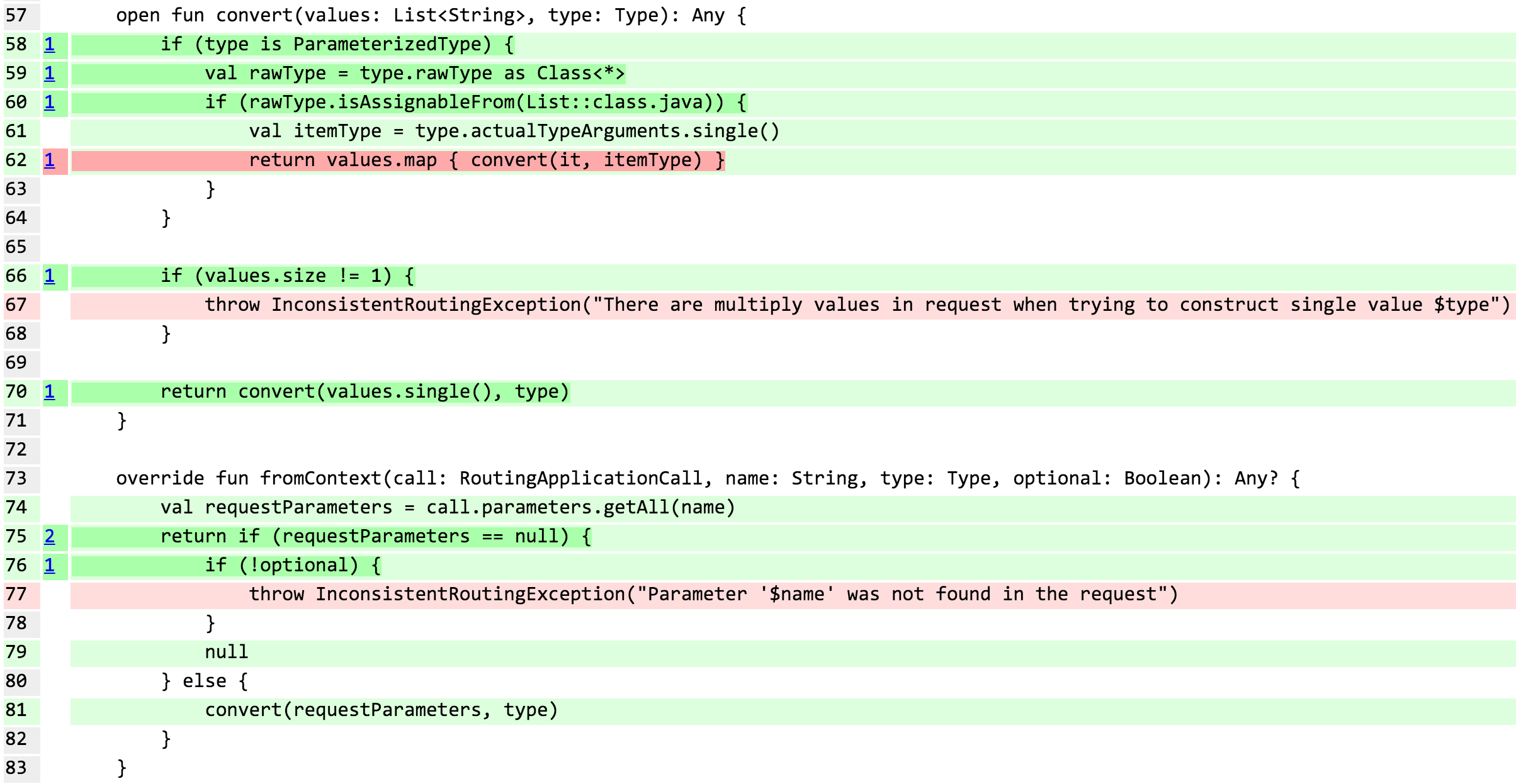 There are no mutation testing tools for Kotlin (yet), and considering Java ecosystem’s history, there might never be one. However, mutation testing is an invaluable tool to assert the real quality of your tests. Even if Pit is not a perfect match for Kotlin, it would be foolish to discard it.

Last week, a colleague pointed out to my team an online developer recruitment challenge. As I find it fun and there was no need to disclose one’s email, I decided to try, just to check if I could to it. The problem is quite simple but not easy: consider a rectangular maze of finite size. One has to find a specific cell on the board - the exit, starting from the origin. One has 2 move options: one cell at a time in one of the 4 cardinal points or jumping to any previously visited cell. Of

Last week, my post was about how you could customize the default Vaadin HTML template so you could add a lang attribute for example. I didn’t ask for feedback, but I got it anyway, so let’s use the occasion to analyze it. First, I must admit that my solution was not Vaadin-esque as I used AOP to get the job done. My friend Matti Tahvonen from the Vaadin team was kind enough to provide not only one but 2 alternatives to my proposal.

A Java geek
—
Experimental: Kotlin and mutation testing
Share this