In this article, I show you the power of the product I stumbled upon this week: Project Lombok enables you to modify bytecode at compile code. First, I will detail what features Lombok brings you out-of-the-box. In the second part of this article, I will describe how to extend it to generate you own code.

Since the dawn of JEE, complaints have been filed regarding the complexity of coding components. I consider EJB v2 a very good example of this complexity: for just a simple EJB, you have to provide the EJB class itself and a home and an interface for each access type (local and remote). This makes it complex, error-prone and more importantly gives you less time to focus on business code where the real value is. Two initiatives show the will to decrease the amount of boilerplate code needed when coding:

The goal of Project Lombok is exactly the same as the previous initiatives but in order to do so, it uses another mechanism.

Version 5 of the Java language introduced the concept of annotations, code meta-data that could be processed at compile time and/or runtime. Unfortunately, in JDK 5, processing annotations at compile is a 2-step process. First, you have to run the apt executable to process annotations, perhaps creating or modifying source files, then compile your sources with javac. That was not the best approach, so Java 6 removes apt and make javac able to manage annotations, streamlining the process to obtain a simpler single step computing. This is the path taken by Lombok.

Lombok’s driving feature is to create code you need from annotations in order to reduce the amount of boilerplate code you have to write. It provides you with the following annotations that will change your code (if not your life) forever:

For example, while learning to code the OO way, you were drilled into making your fields private and into writing public accessors to access these fields:

Since this is a bother to write, some (if not all) IDE have a feature to generate the accessors. It has some drawbacks:

Moreover, creating accessors manually is error-prone: I once searched for hours for a bug in code developed by a fellow developer and finally found the setter was wrong.

Since getter / setter is only meta-data for a field, Lombok’s stance is to treat it like such: in Java, meta-data is managed with annotations. Look at the following code:

I decompiled the generated class (using JAD) and it creates exactly the same bytecode, only the source code is more concise and less error-prone.

When thinking, I found 3 arguments against using Lombok:

Using Lombok is a 3-step process:

There’s a catch, though. Notice the last statement and the emphasis on javac. Since most (if not all) the developers you and I know focus a little bit on productivity, chances are you’re using a IDE. I do not know about NetBeans and fellows, but my favorite IDE Eclipse does not use javac to compile but its own internal compiler.

Our friends from Lombok thought about that and Lombok is able to hook into Eclipse compiling process too. In order to do so, just launch lombok.jar and follow the instructions on you screen: it will just add 2 lines to your eclipse.ini. 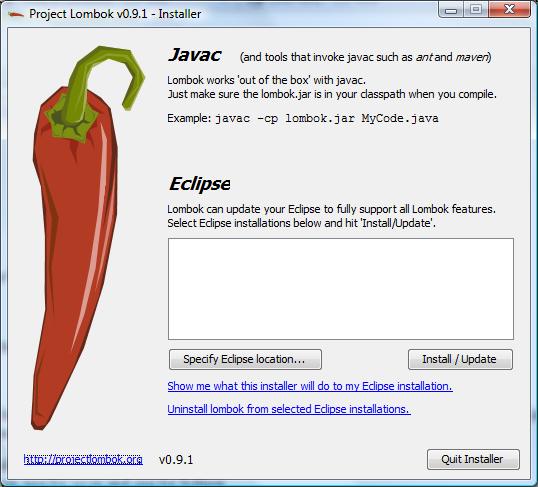 A word of advice (since I made the mistake): if you launch Eclipse with a command that takes parameters, such as a Windows shortcut, these parameters take precedence and eclipse.ini is silently ignored. Just to let you know…​

To my knowledge, there’s currently only a single extension of Lombok called Morbok. It lets you create your classical private static final logger with just an annotation.

The advantage of this is that Morbok automatically uses the fully qualified class name as the name of the logger so no more copy paste error. The disadvantage is that if you do not use Commons Logging as you logging framework, you have to configure each @Logger annotation with the framework you want to use, there’s no overall configuration: IMHO, that’s something that could be covered in the next version (is there’s one).

First things first, Lombok needs a JDK 6 to compile since annotation processing is done in Java 5 with APT. For now, Lombok hooks into the compiling process immediately after the environment has built the AST for the class.

It then passes the structure thus formed to each of its referenced handlers. There’s a single handler for each annotation: HandleGetter for @Getter, HandlerSetter for @Setter and so on. Handlers are, guess what, responsible for handling annotations.

Extending Lombok is a 3-step process:

As an example, I coded an embryo for a @Delegate annotation. Such an annotation on a field indicates that the declaring class should have the same public methods as the field’s class and each method’s body should be a call to its delegate’s method.

The previous code should generate the same bytecode as the following code:

The final implementation is left for the brave readers: original sources are here in Eclipse/Maven format.

Some improvements could quickly be made to Lombok. First, I don’t like the monolithic structure the JAR has. IMHO, it could be nicely decoupled into 3 separate JARs: the Lombok agent itself, the provided annotations and associated handlers and finally, the installer.

Moreover, coding two handlers for each annotation is a lost of time. What if you need to support NetBeans too? Perhaps using the Service Provider is a mistake…​

Finally, depending on Sun’s internal compiler API is too big a risk. I think that if Lombok could provide a facade to this API, it could be less risky for enterprise to take this road and the bridging could be made by people who understand the API (the Lombok team) and not base developers (like myself).

All in all, and despite these flaws, Lombok looks like a very promising project that could well mimic Spring’s success. That’s what I wish it anyway because it’s real sideway thinking that brings much added value: good luck for the future!

This is the 3rd post in the Hibernate hard facts focus series. In the third article of this serie, I will show how to tweak Hibernate so as to convert any database data types to and from any Java type so as to decouple your database model from your object model.

This review is about Packt’s Apache Maven 2 Effective Implementation by Maria Odea Ching and Brett Porter. Facts 12 chapters, 436 pages, 39.99$This book is intended for people that already have a good experience of Maven. The 'About Maven' part is as small as it can get, it is the opposite of what could be 'Maven for Dummies', where you learn to type mvn something.A good portion of the book is about tools that are part of the Maven ecosystem: Continuum for the CI part and Archiva for the

A Java geek
—
Lombok reduces your boilerplate code
Share this