Some years ago, I discovered the Spring Boot actuator:

Spring Boot includes a number of additional features to help you monitor and manage your application when it’s pushed to production. You can choose to manage and monitor your application using HTTP endpoints, with JMX or even by remote shell (SSH or Telnet). Auditing, health and metrics gathering can be automatically applied to your application.

To sum it up, the actuator offers endpoints that allow monitoring of the application from different angles. This post is a change analysis between Spring Boot 2.0 and 1.5.

Several new endpoints have been added to the actuator in Spring Boot 2.0:

The dump endpoint has been renamed to threaddump to disambiguate with the heapdump endpoint.

Endpoint-related properties have been moved from the top-level endpoint property to management.endpoint, i.e.:

Only the health endpoint caches responses.

All parameter-less read operations have such a cache.

Endpoints are accessible over HTTP by default. In order to send metrics from the metrics endpoints to JMX, an additional exporter bean needs to be registered.

JMX MBean wrappers are registered around (nearly) all endpoints. Every bean offers one single simple operation that displays the same data as if sending a GET request to the HTTP endpoint of the same. For example, the org.springframework.boot.Endpoint.Info MBean provides the info() operation, as shown below: 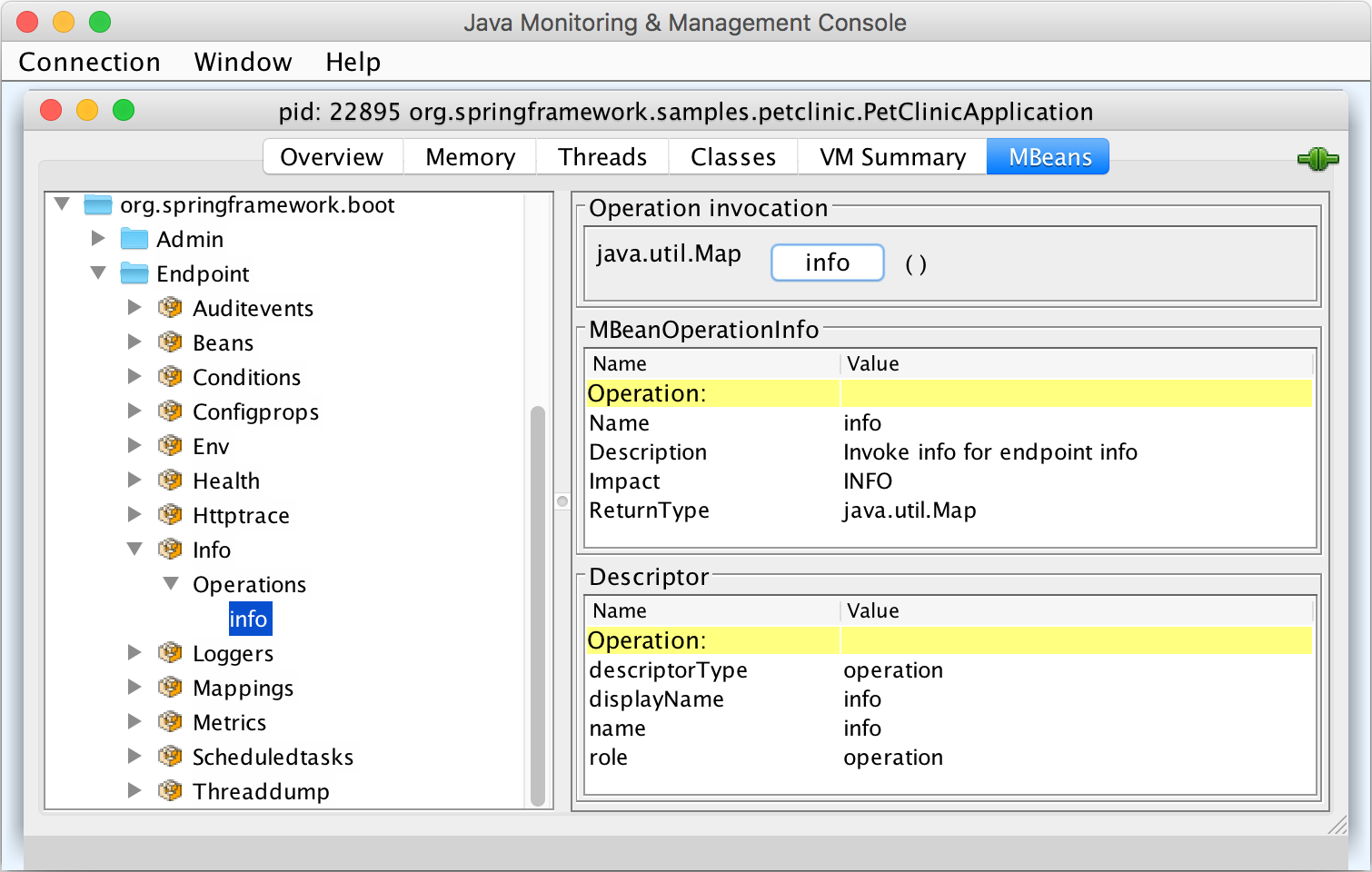 Endpoints may be flagged as sensitive. In order to access such endpoints, one has to autenticate with username/password credentials. The sensivity of each endpoint can be overriden in application.properties.

Overall security can be disabled using the application.properties configuration file.

Only the overal health status (i.e. { status: UP }) is exposed when not authenticated. If details are must be displayed regardless of authentication status, the endpoint must be configured accordingly:

There are 3 levels, details being shown:

Creating a custom endpoint is a two-step process:

The class doesn’t need to extend from a specific superclass. However, the class needs to be annotated with @Endpoint.

Endpoints are accessible via HTTP and JMX. It’s possible to restrict accessibility to either the former or the later, by annotation the class with @WebEndpoint or @JmxEndpoint.

Spring Boot 2 changes how the actuator behaves in many non-trivial ways. Should one relies on Spring Boot’s actuator, one should take time to evaluate the effort to migrate.

Last week was the release of Oracle’s GraalVM. As stated on the website: GraalVM is a universal virtual machine for running applications written in JavaScript, Python 3, Ruby, R, JVM-based languages like Java, Scala, Kotlin, and LLVM-based languages such as C and C++. GraalVM removes the isolation between programming languages and enables interoperability in a shared runtime. It can run either standalone or in the context of OpenJDK, Node.js, Oracle Database, or MySQL. There are several fac

Spring Boot is a huge success, perhaps even more so than its inceptors hoped for. There is a lot of documentation, blog posts, and presentations on Spring Boot. However, most of them are aimed toward a feature, like monitoring or configuring. Few - if any of them, describe real-world practices. In this post, I’d like to highlight how to design a Spring Boot having multiple modules.