Last week, I read a post about Kotlin code analysis, thanks to the Kyiv Kotlin UG. I stumble upon a lot of similar posts: they show how to hack into the build to produce a text report showing quality issues.

At the risk of sounding arrogant, I claim this is not proper software engineering. It’s a one-time hack: it has no value over the long term. Code quality is a serious subject, and should be treated accordingly. First, it needs to be evaluated, then issues have to be stored and compared during the entire lifetime of the project. The good thing is that the tooling to achieve that is already available, and I hope is part of everyone’s build pipeline: it’s SonarQube.

From Detekt’s Github page, features are:

In addition to all of that, it also provides a plugin to integrate into SonarQube, thus benefiting from the later storing and comparing capabilities.

SonarQube makes it easy to install new plugins: the embedded Marketplace capability lists all available published plugins. Just check the ones you want and you’re done!

Unfortunately, Detekt is not part of the marketplace yet.

Thus, setting up the plugin is a manual process:

As usual, running the check is just a matter of the standard command-line:

I ran the analysis on the Kaadin project: 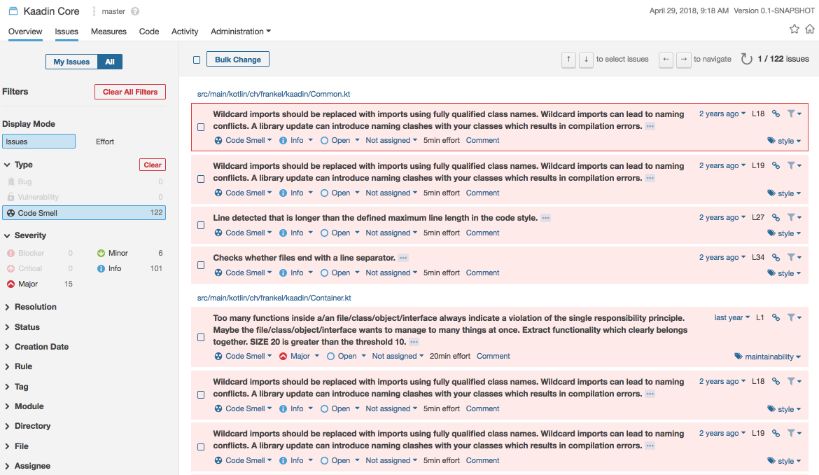 Of course, this is the raw analysis, with default rules. However, it already makes a lot of sense.

In the JVM ecosystem, a lot of tooling is already available - for free. Most (if not all) Java projects I know of have build pipelines in place since ages: they check out the code, compile it, run tests, perform quality checks, etc. Why should those pipelines be discarded by switching to Kotlin? Detekt makes it easy to reuse one’s continuous integration build chains by just providing the missing component.

I’ve already written about the excellent monitoring features available in Spring Boot. In Spring Boot 2.0, there has been a major rewrite regarding how the /metrics endpoint is designed. This is the subject of this post.

Last week was the release of Oracle’s GraalVM. As stated on the website: GraalVM is a universal virtual machine for running applications written in JavaScript, Python 3, Ruby, R, JVM-based languages like Java, Scala, Kotlin, and LLVM-based languages such as C and C++. GraalVM removes the isolation between programming languages and enables interoperability in a shared runtime. It can run either standalone or in the context of OpenJDK, Node.js, Oracle Database, or MySQL. There are several fac

A Java geek
—
Check the quality of Kotlin code
Share this